The road meanders along the coast, winding at often stomach churning heights through dusty cliff-perched villages. Everybody we pass on the road is in some stage of undress, usually sun-charred red. Every couple of kilometres we stop at the waving request of a young woman in shades and crop top, hand tickling the dead air above her head. Occasionally she's accompanied by an older woman. No men get on or off.

The landscape reminds me of two places - first, the valley strewn train-ride from Sarajevo to Mostar, but more vividly the Sicilian countryside. The hills stagger upwards in clashing outcrops of woody green until, at a certain point, a yellow-grey eruption of stone ends their grassy ascent. All this huge grey mass is scribbled over with shallow-rooted, tilting shrubbery, a wire mesh puncturing its still surfaces. 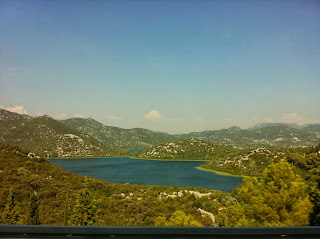 As the road hunkers higher up on white-knuckle bends the cliff-face bounds up to us on the inside. We shudder past its over-hanging mouths, its hoard of thin trees whispering towards us. Scored into the mountains' many faces are the bright orangey-yellow trails of rock slides. They run patchily across its surfaces, rippling in zigzags over its bumps and grooves like the scratch marks of a falling cat. Scattered in the messy green of the foot-hills are tidy rows of olive trees, the squat, rusting shells of old Yugos, and the occasional holiday home.

We pass through Baska Voda, dangling over the Adriatic, its shimmering distance doing nothing to cool the air. Beyond it the sea and the mountains suddenly part ways and we are thrust into the first open landscape in miles. But the sea quickly rushes back. At Bratus we pelt round a narrow mountain pass and rise up and over the sparkling water.

By the time we reach the border checkpoints into Bosnia and Herzegovina, the hills have shrunk, clouded now to their peaks in green. Where the hills are less steep there are whole forests, great rows of pine sauntering straight into the bays below.

We cross Bosnia's sole 20 km of coastline, stopping near the border back into Croatia to buy cheap cigarettes and beer. Last time I was in Bosnia we passed through Croatia, so this turn of events feels fitting. We arrive at a glorified petrol station on a cliff, an under-staffed and over-priced restaurant attached to one side. The waiters charge angrily between rows of chain-smoking Italians. Dozens of coaches are squeezed into the tiny car park. People throw money - Croatian, Bosnian or Euros - at a young woman at a till inside the shop. They're buying Turkish delight, cheap beer, cigarettes and spirits, as if stockpiling for a very debauched apocalypse. 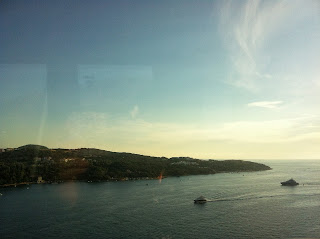 As we cross the last of the hills into Dubrovnik, my passport checked for perhaps the tenth time in the former Yugoslavia, I wonder if the existence of border controls is a permanent or merely passing phase. Certainly the removal of checkpoints has its future as a political project pegged, for the moment, to the future of the EU. As there were none under Tito, so perhaps there shall be none under Brussels. Though this would no doubt be a great achievement (in a region torn apart by ethnic cleansing just thirteen years ago), can the people of the former Yugoslavia rely on the stability of the EU settlement any more than they could Tito's?
Posted by Adam Blanden at 03:44