Prague is not the best place in the world...

One problem with expat writing is the tendency to varnish the image of one's adopted home. Few people ever moan about where they've wound up living because everyone ultimately wants it to look appealing. This is one of the major motivations behind writing a blog, after all: to convince the world, and yourself, that everything is just swell. But I can honestly say, despite living here and really liking it, that Prague is not the loveliest place in the world. It's just quite nice. And what most self-affirming blog bilge tries to conceal is that most of us, even the most upwardly mobile, successful and wealthy of us, live in places that are basically just quite nice, and that we happen to live in them largely by chance. For the rare few who have always had a dream place - say, New York or London - you either get lucky or compromise. The rest of us are basically happy if there's a decent pub nearby and good connections to a supermarket. I fall into the latter group: I didn't always want to live in Prague but I do (for now). It'll never be New York, and there's good reason for that.

Prague has always occupied a peculiar position between the cosmopolitan and the backwater. As seat of the Holy Roman Emperor its splendour was apparently unrivalled. But mythologising this cosy knot in the Vltava proves too easy. Rudolf II might have relocated to Prague in 1575, but this dotty mystic was more an advertisement for eccentricity than raw imperial power. Modern times recall little of Prague's old eminence, instead turning the ancient metropole itself into a nicely fossilised anachronism. Its pre-Hapsburg landmarks - Hradcany, the Radnice, Charles Bridge, the Tyn Church and so on - lie upon it like an ill-fitting suit of armour. Bohemian defeat at Bila Hora (White Mountain) put paid to native religious ambitions, piety subsequently ditched for reasons of national resentment (this long before any atheist-communist put pen to paper). So began the national Dark Ages (doba temna), the conclusion of which - depending on how pessimistic the person you ask - remains uncertain.

Every year in January Prague briefly renews this national Dark Age. Life retreats indoors, seams of churned snow clog every street, and a fog thick enough to cushion a fall descends on the city. In the long winter, the quiet back streets of Vinohrady (the suburb where we live) linger, empty and without purpose, after the short dusk. Dog walkers tuck their heads inside tufty hoods and rustle through the darkness. By day the sunken murmur of coffee-drinkers defines all interiors; the weary thrum of trams as they accelerate up and down Vinohradska and Korunni does the same for the external world. The drooping pastel apartment blocks blanch beneath the snow and floods of mist. Everything assumes a murky, discoloured layer of browned ice. Shattered faces seek out the reassurance of subterranean cafes. There's something deeply charming about this: the act of exchanging a bruised, mottled world for one of intimacy and warmth. But still, where's the vibrancy? Where's the energy and relish of city life? This, then, is when a place (like a person) has become truly familiar: when its defining quirks are at once annoying and endearing.

Perhaps it's the tedious reality of all cities: beneath the florid exteriors, all are secretly tethered down by the rigorous monotony of work. It's only in the imagination of the day tripper, off to see the bright lights, that cities are carnivalesque playgrounds. Yet there is a difference between Prague, with its working week austerity and its sleepy, empty weekends, and the bigger European cities. Where can compete with, say, London or Berlin, which in their different ways daily regurgitate the truly vast human energy - financial, industrial, administrative, creative - they draw in from around them and the rest of the world? That, I suppose, is the benefit of being a global entrepot sucking in and redirecting global trade and finance. Though historically it was London which played that role, Berlin's expensive postcommunist make-over, relatively cheap rents, and strong artistic and cultural traditions have led it down a chaotic path to resurgence. Yet chaotic is the key word: Berlin's social contradictions are in fact what make it so appealing, not the success (or indeed lack thereof) of "modernisation" (i.e. liberalisation) of the city's economy. Despite the buzz around innovation (Europe's third "most innovative" region, apparently), the excitement of Berlin comes as much from the opposition to gentrification as the actual process itself. Squats and artistic collectives have fought long and hard to preserve Berlin's cheapness and the right to social benefits and subsidy of the arts. In this sense, Berlin's older - sometimes communist-nostalgist - citizens have something in common with the progressive student-led young: the demand for affordability. There is a certain convergence of tradition and newness in the context of radical changes, making the city's future look open to those who can seize it. The same cannot be said of the deeply polarised society of London.

Neither can it be said of Prague. Although this city's ongoing liberalisation has generated extraordinary concentrations of wealth, an increasingly difficult-to-fund welfare system has tottered into what are seemingly its last days (the previous government only held back because its momentum suffered from corruption scandals; some social pruning seems inevitable, even under the new Social Democrat-led coalition). And while the city has continued to grow - especially relative to the rest of the country - no satisfactory recycling of profits into social welfare has been implemented. The Czech Republic has an apparently investment-pleasing flat tax rate of 15%, making vital maintenance work costly for both municipal governments and private community groups (many apartment blocks remain cooperatively owned but underfunded). Thus the housing-stock is deteriorating, while, increasingly, average-income Czechs are pushed out to the periphery. The Czech economy is finally emerging from a recession of record length. unemployment, low by European standards, still stands at over 8 per cent. 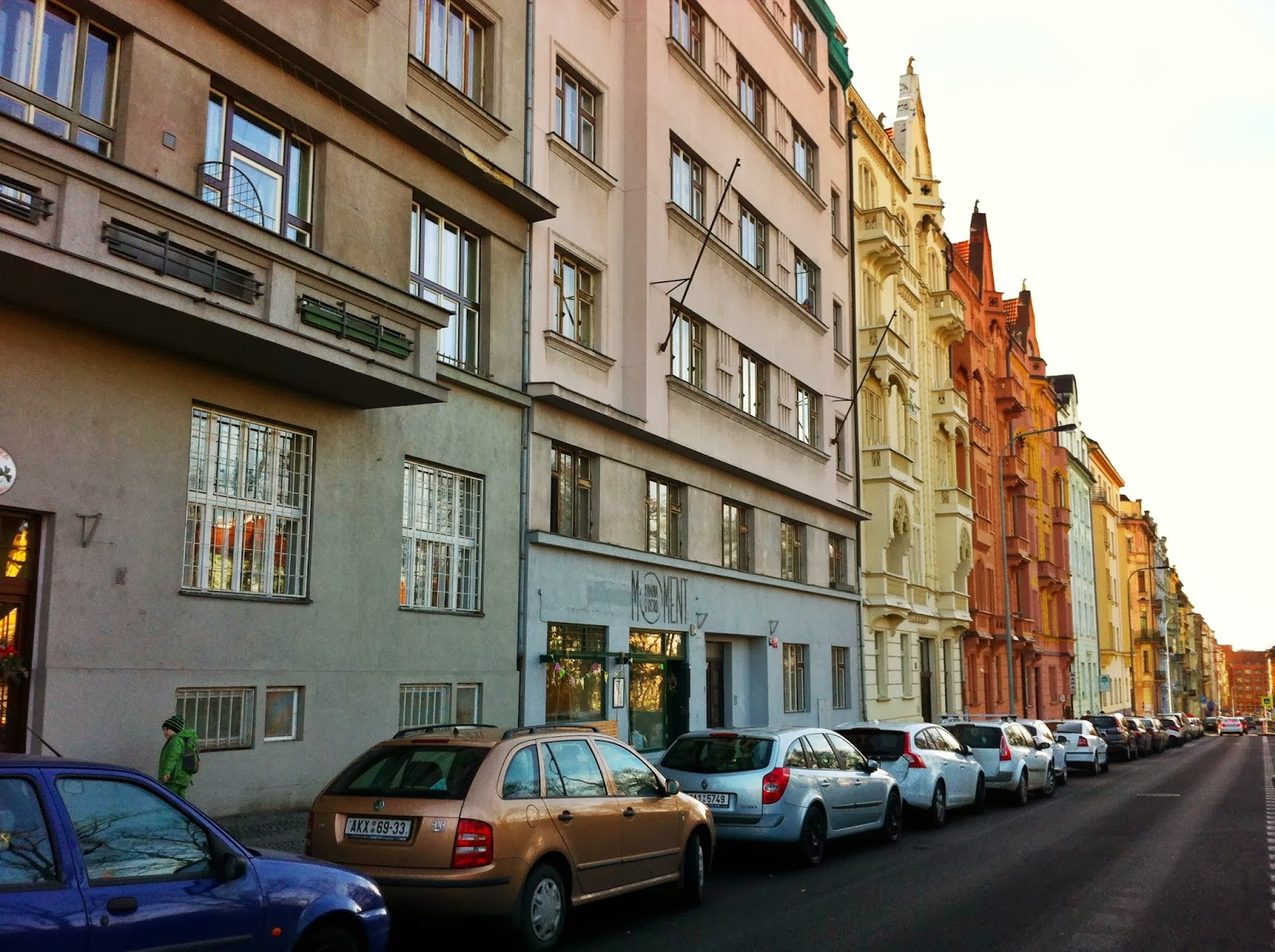 To this observer at least this process has given the centre of Prague an occasionally neglected, stripped-to-the-bone feeling. Lots of the old early 20th century buildings in Vinohrady, where I live, have had expensive renovation work done to them, presumably by private individuals or by co-ops, who have subsequently been unable to afford their upkeep. As such the walls are regaining their famous communist-era layer of grime. Chunks of plaster and paint regularly fall down from the roofs and balconies, requiring whole pavements be roped off to avoid falling debris. And there is a lot of dog shit. What better evidence could there be of continuing alienation and distrust of the capital than the willingness with which people let their dogs excrete on every available surface? Talk about passive protest. To my endless frustration, this means it's risky to ever lower my guard: look up for falling shrapnel; down for fresh droppings.

But Prague still exercises a strange attraction. The city's grandeur is sweetly tempered by its element of the shambolic; its Old Town cannot be beaten for sheer beauty; its skyline is a perfect blend of symmetry and asymmetry. Vinohrady, this twice-gentrified suburb with its uptight, ageing population and suspicious curtain-twitchery, mounts the eastern slopes of the town like some civilisational still-life: the ruins of a vanished kingdom where everyone aspired to bourgeois respectability and kept a cat on a neoclassical balcony. It is the final remainder of the new bourgeoisie of the nineteenth century, which built entire city quarters in tribute to itself. The new world of the 21st century stands uncomfortably in its shoes.

Photos by Siobhan
Posted by Adam Blanden at 06:02