Top 5 Shit Pubs in Prague (Followed by 5 Good Ones)

Everyone knows Prague is full of blatant tourist muggery intent on astronomically over-charging currency-baffled, bum-bag-toting Americans for soggy Schnitzels. But those places are obvious, and not only in their shameless cruelty - look out for the burly mafioso types guarding the exits - but also in their relentlessly depressing, would-be glamourous exteriors - all blinking neon, laminated menus, and under-dressed female staff.

This piece isn't about those unsubtle staples of the tourist mile but rather focuses on the seemingly innocuous: those pubs that, from the outside, look like harmless if unremarkable drinking-holes. Yet inside all manner of perils awaits you.

All highly subjective, these choices reflect damning verdicts arrived at after a) multiple duff visits b) one bad experience or c) blind prejudice. Enjoy. 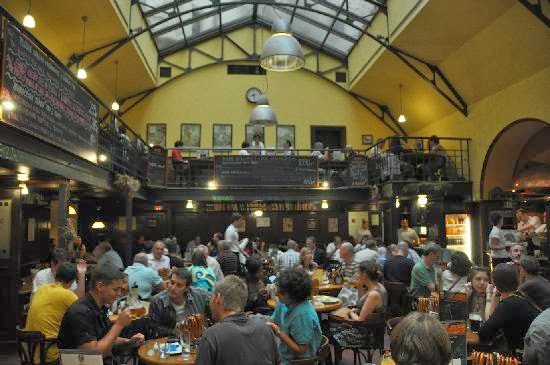 A controversial choice for many, I've just never had a good time there. This massive, soulless hall with its half-arsed stab at traditional decor has apparently been over-stuffing foreigners for 600 years (or something). In that time they've perfected a very Prague-ish brand of weary nonchalance. Sold as a slice of "authentic" Czech drinking culture in the heart of the Old Town, it's basically as awful as anywhere else, only slightly cheaper. Predictably the lower prices hardly encourage the staff to be any nicer. I'm sure working in a bar in the Czech Republic is poorly-paid, and certainly I wouldn't want to do it. That it's what the frustrated, mostly middle-aged service staff do as a career forever is not only upsetting but visibly galling for them. They have my sympathy. But that's not going to make them any less bored or unimpressed at the sight of yet another gleeful Brit requesting an absinth. The whole thing grinds on interminably to a deafening, claustrophobic soundtrack of hissing beer taps and hollering stag-parties. 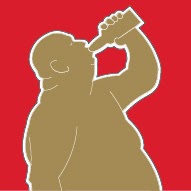 The original branch of this not-really-a-museum museum is so dimly-lit that it's impossible to evaluate. Not so this exciting new addition to Prague's collection of anonymous beer halls. Selling itself solely on the fact it serves 200 beers (or something near that) they've forgotten to decorate the place, install functioning toilets and decent furniture or hire actual people instead of angry, malfunctioning robots. Barely concealed hatred vies for place with the timeless of habit of just ignoring customers. All of which is slightly more excusable when someone has been at it for decades, but this place has just opened and the staff are all young. Not that the depressed jobs market is swollen with exciting jobs for the youth of Prague, but at least they've got the hope of something better ahead of them. Also, there's no need to sell 136 beers (or whatever it is). Why not sell five and change them occasionally? That's not going to happen, however, because that would require some care and forethought, qualities found hopelessly wanting. Also, the mascot - a naked sillhouette which resembles a morbidly obese Mussolini guzzling a beer - is just a bit off-putting. 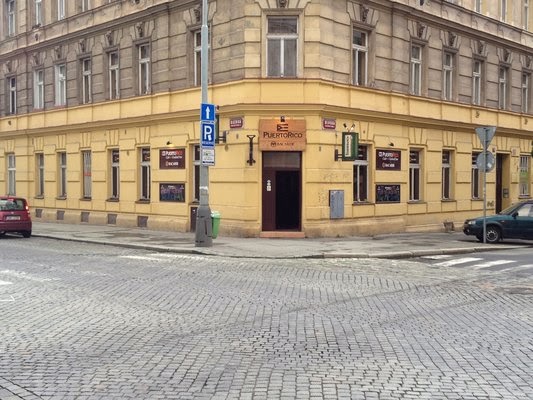 This desperate, under-loved den of a 'cocktail bar' in Vinohrady occupies a very special niche: that of the unconvincing pan-South American novelty pub. A couple of pictures of Che, cigars, cars, and wizened old men are apparently enough to 'transform' a typical pub into a carnival of cheap exotica. Always semi-deserted with aggressively loud trance music on the sound system, actually ordering a cocktail is a daunting and disappointing experience. You shout at the server several times, wait fifteen minutes, and eventually a semi-solid slop of ice and glow-in-the-dark strawberry flavouring is delivered to your table. Meanwhile, stray wires dangle ominously from the ceiling, holes are patched up with black duct tape, and one middle-aged woman cackles demonically from her smoky corner. Still, she's the closest thing to joy you'll find here. Less a drinking-hole than a sinking-hole right in the middle of my bloody neighbourhood. 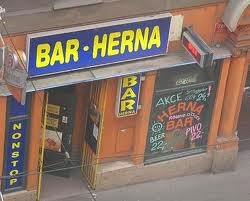 It feels slightly unfair to moan about Hernas. Sure, the Czech Republic's unique, 24/7 non-stop pubs are horrific by normal, "human" standards, but who hasn't ended up in one at 5 in the morning, noisily engaged in verbal battle, or quietly throwing up in an ashtray, or shooing away the unwanted attentions of some grizzled local lothario, or even being that lothario? Hernas are banned in the Old Town so you'll have to venture further afield to experience them. After all, why wouldn't you? These are places of true community spirit. It's just that the community in question consists solely of bearded old men and the barely contained sexual frustrations of their younger, randier counterparts. Approach with caution, but don't worry too much: everyone's too hammered to fight. 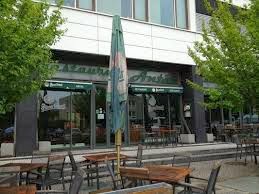 By some stretch the worst pub I've ever been to. Conveniently, for our purposes, it also represents the apex of all that is shit about Prague pubs. Pleasingly nondescript from the outside, it inhabits a strange limbo between smoky neighbourhood pub and after-work bar. The two worlds clash to dispiriting effect. Men whose poodled haircuts were probably banned in Britain in the 1970s perch upon stools, eyeing all movement with feline curiosity-cum-aggression. The frankly terrifying bar staff make it their mission to impress these watchful, squatting ringleaders by seeing who can be rudest to the unsuspecting non-regulars. The aged, denim-saturated skeletons on stools chuckle mirthlessly to themselves at their minions' shenanigans. The suited after-work types largely get in and out as swiftly as possible. More foolhardy are those, unused to the relentless venom of the oldies, who stick around to get drunk. As the drinks accumulate so does the anger of the bar staff, who take to verbal abuse and deliberately adding extra drinks to the bill. Eventually a sort of pissed Stockholm Syndrome develops in which the victims come to see their treatment not only as appropriate but laudable. You give feeble thanks for their service, go home, and cry yourself to sleep.

Now five of the opposite: places that, for whatever reason, get it right. I hated this place on my first visit, probably because it was full of exuberantly drunk teenagers who insisted on flirting with each other and wearing their baseball hats backwards. Since then they've mercifully been absent, allowing me to appreciate the slightly shabby, messy quality that a few pubs in Prague manage but Duende has perfected. Also, it's right next to Hemingway's, a just-the-right-side-of-posh cocktail bar, and Standard Cafe, a friendly late night coffee shop and bar, so when one is full you can push onto either of the others.

Depending on your perspective this is either a chaotic window into hell itself or a deliriously fun battering ram of the senses. The owners have done everything they can to encourage mass beer consumption - allowing punters to pour their own pints and keeping an international league of beers-per-table on screens around the room (curiously Bucharest always seems to be first). The emphasis is clearly on drunk people's innate tendency to compete like gluttonous feudal barons over who can consume most rabidly: Germans and Americans alike remove their shirts and mount tables in bizarre, highly ritualised displays of drinking prowess. All of which is really quite exciting if you can set aside your, um, dignity, self-respect and intelligence, and just brainlessly enjoy it. It's sort of the drinking equivalent of smashing up old furniture just because you can. If you can't pour a pint of beer at the start of the evening you'll soon be an expert. Drunken idiocy, then, but done right. 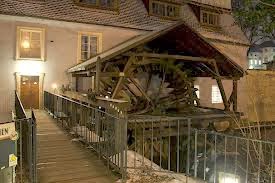 With more hipsters than you can shake a fixie at, this converted water-mill on Kampa island has just the right amount of artiness. It's the sort of place that guide books describe as "relaxed", but is also big enough and gets busy enough to feel lively in the evenings. No one ever shouts at you for mispronouncing "peanuts" in Czech and no one tries to con you out of 30 kc every time you go there, which is at least a relief. The thing that really swings it is the building itself - accessible by a candle-lit bridge over a tributary of the Vltava, it has an unmatchably special atmosphere without being too precious. 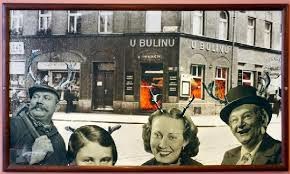 Technically this is a restaurant but so is number one in the worst list. The staff are weird but friendly (one waiter insists on wearing a single white velevetine glove at all times, as if in mourning for Michael Jackson) and for some reason the walls are filled with photos of people with horns. But don't let that put you off: the food's great and the place comes with a bafflingly translated, ludicrously convoluted origin story printed inside every menu. Great fun, and proof that "traditional" Czech pubs can be excellent. 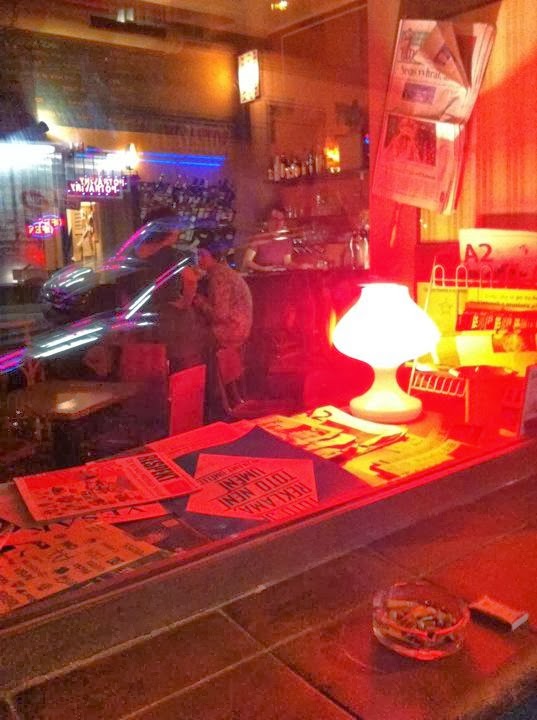 So it occasionally gets overrun with earnest looking Magic the Gathering-types, but mostly V Lese gets it right: often-decent bands play in the semi-refurbished basement while people sit around on knackered furniture upstairs. Prague's "older crowd", usually hardy enough to show up anywhere selling booze, are put off by the loud music, meaning there are refreshingly few tobacco-addled, double-denim-rocking snaggle-tooths to be seen (sorry, old Czech men, it's true). Instead nice young people in nice clothes chat amiably and roundly fail to assault each other with the strength of their booze-breath. Call me bourgeois, but it's literally a breath of fresh air.
Posted by Adam Blanden at 10:19