The High Tatra Mountains, Slovakia: "All the Way to the Snowy Bit with My Shopping" 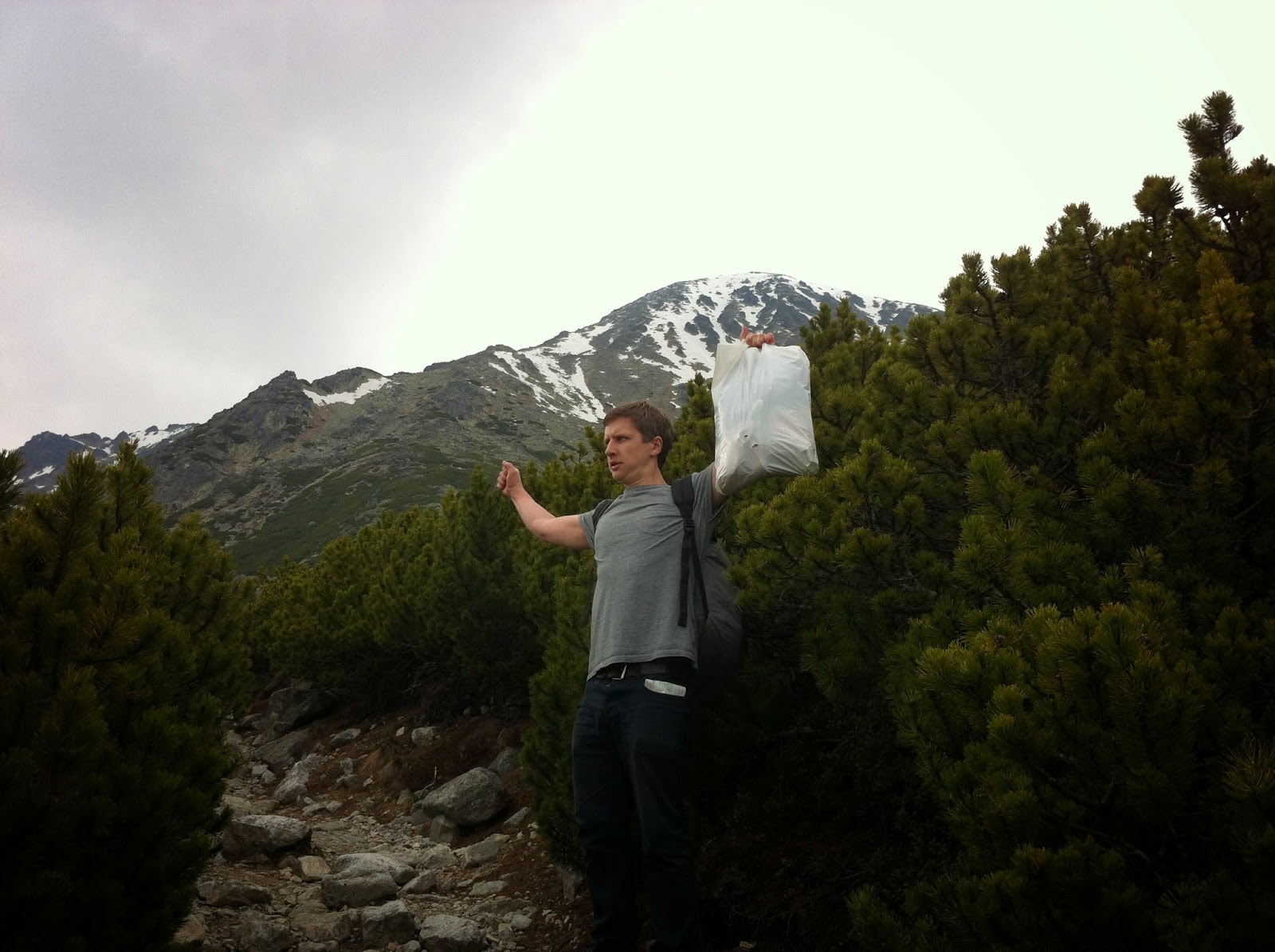 A distinct odour of boiled eggs and old shoes hung on the air. In the corridor's semi-gloom a bandana wearing teenager shuffled past, too engrossed in a bowl of cereal to cast us even a sulky hint of acknowledgement. In the adjacent kitchen people sternly buttered bread and muttered awkwardly to each other about clean towels and forthcoming stop overs in German villages. A man with a too-big-laugh blurted whinnying, nervous expulsions at the sole staff member. Skis and signed t-shirts and drapes and pizza eating-league-tables clung to every available surface. Everything exuded an air of dampness. So, exactly the kind of hostel we'd come to dread.

We were a little surprised to find this familiar feeling chunk of backpackers' paradise in a far flung corner of the Slovakian mountains. Despite the nearby slopes of the Beliankse Tatry - making up a craggy panorama visible from the front porch - one of the guest's signally failed to leave the hostel throughout our whole stay. There in the living room when we arrived, and still there when we left three days later, he seemed far more interested in the hostel's DVD collection than the scenery.

Still, one guest did make a good point: "When I'm staying by myself all the time I go kinda crazy. It's lonely; I need people." One woman, we were sagely informed, was in the midst of two years' "intensive journeying". If that was me, I'd want any company I could get. And we had to admit we benefited a great deal from our hostel hosts, whose generosity and patience were ample (perhaps because, this being the mountains, there was nothing else to do).

"It's a bit of a slog. About half an hour uphill," the aforementioned friendly host said.

Fresh off the Prague sleeper train, a good six hours' clattering, rhythmic sleep under our belts, this seemed doable.

The thick black clouds curling around the highest peaks of the Vysoke Tatry (the High Tatras) promised rain. But we weren't going up that high, so what did it matter?

We followed a medium level blue trail for the first half an hour, traipsing over foot-hills still half buried in the wreckage of the 2004 storms that took apart over a third of the forest. Felled trees rested everywhere. It was a bit like the video to 'Earth Song' by Michael Jackson. A scene of Hollywood-esque devastation. 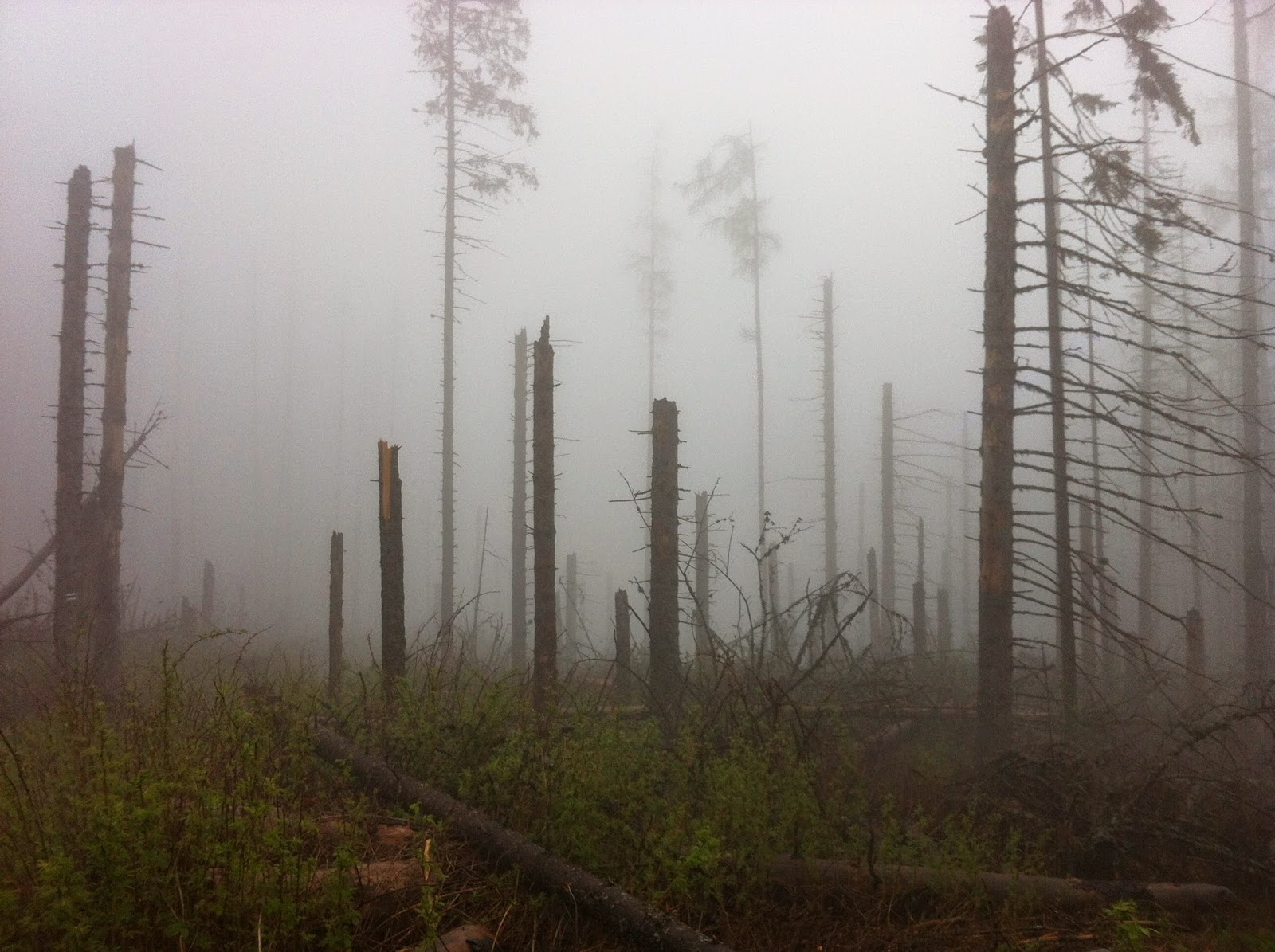 Following the storm the Slovakian Environmental Ministry declared that, since the Tatras had suffered so much, their protected status should now be downgraded and tourist development accelerated. Quite the terrifying example of a government turning crisis into opportunity. There was, however, decreasing evidence of development as we scrambled higher up the mountainside.

We were jubilant as we reached the checkpoint that led us off the blue trail and onto its red cousin. Now we had joined the so called Magistrala - the only trail that runs the whole length of the Tatras, themselves a part of the greater Carpathian range. Almost stopping to drink the beers we'd brought with us, we decided to wait until we reached the rumoured frozen lake. It would probably only be another half hour, I gamely told myself.

Fatefully it hadn't occurred to me to wonder why the lake was still frozen in May, the sort of commonsensical query I've got a frustrating habit of avoiding. Nor did I really wonder why everyone else we passed on the trail was in proper hiking gear and thermals. I, on the other hand, had just my trusty Primark hoodie and a bag of shopping with said beers and some cheese in.

The trail cut remorselessly uphill, delving under thick foliage as the now low-hanging clouds began to spit. Then, after scrambling over rocks, we emerged blinking from the underbrush to be confronted with the magnificence of the plain below. Perched on the sheer crest of an outcrop poking out of the side of Lomnicky stit (the range's tallest peak), the vastness of the land rolled out around us in a thick balm of green. The rain was now a little icy, prickling the back of my neck, but worryingly we still had higher to go. 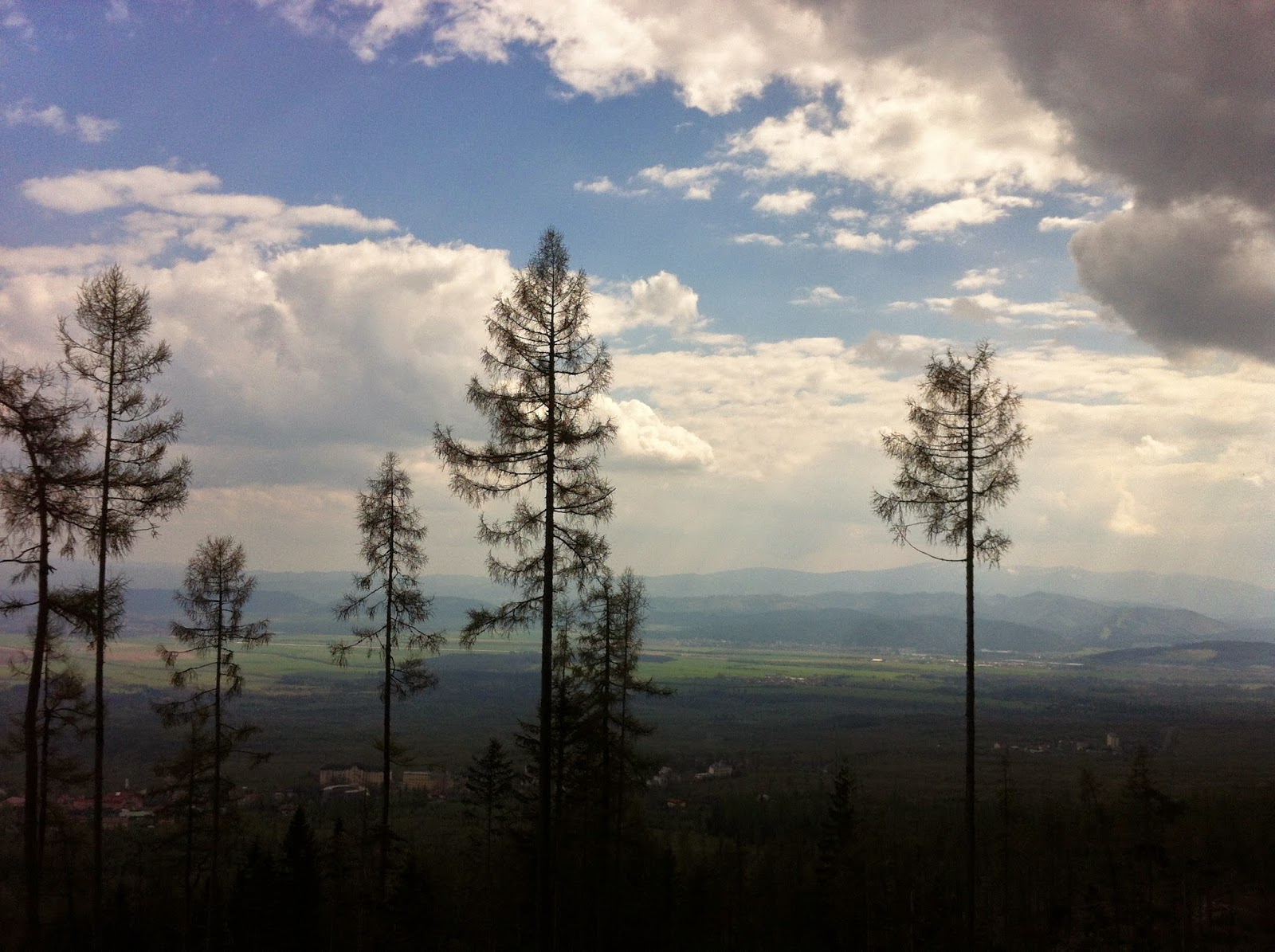 As the elevation increased so did our vague sense of disquiet. Less confident of our speed, this drawn out slog, winding ever higher up the side of the mountain, gave me plenty of time to reflect.

"About half an hour uphill," we had been told.

This was ostensibly true: the immediate ascent had taken about half an hour. But the red path was now winding upwards in deceptive and increasingly craggy increments. Siobhan - who has a distinct tendency to go a bit 'jibbly-wibbly' in the knees when confronted with heights - was scaling the endless system of rocky promontories with admirable firmness.

"How is it?" I asked as she scrambled over one particularly jarring ledge.

"Good if you're a mountain goat."

I followed carefully, trusty shopping bag in hand, just a tiny bit unbalanced. Even the plant-life had changed, reduced from the rain-forest-density below to thick clumps of low-lying shrubbery clinging tenaciously to the unforgiving rock face.

Below stretched a vast expanse; distances I was more accustomed to enjoying from the comfort of a plane seat than when standing upright on an icy, windswept ledge. The Slovakian countryside rolled out, unbroken save for the occasional copse and a few winding roads, for miles.

Slovakia is an interesting national case. Plucked from Hungarian territory post-WWI, it was partly defined by the ambitions of their neighbours, the Czechs, and partly by the Slavic linguistic minority who had resided in the territory for centuries. It had once been incorporated in a Moravian empire which unified the Slavs of the region and which produced the first cyrillic alphabet. After the disintegration of that empire Slovakia was swiftly annexed by the growing power of Hungary. The city that now serves as Slovakia's capital, Bratislava, for a time became the Hungarian capital, under the name of Pressburg, after the Ottomans took Buda. A small reminder, then, that territories and the sovereignties declared over them are composite, contingent things. The panorama around us had changed hands multiple times - its earth subject to multiple constructed sovereignties. These remain unresolved for a few staunchly nationalist politicians on both the Slovakian and Hungarian sides of the border. "Let's get in our tanks and bulldoze Budapest," nearby Zilina's former mayor and all round extremist, Jan Slota, has suggested. 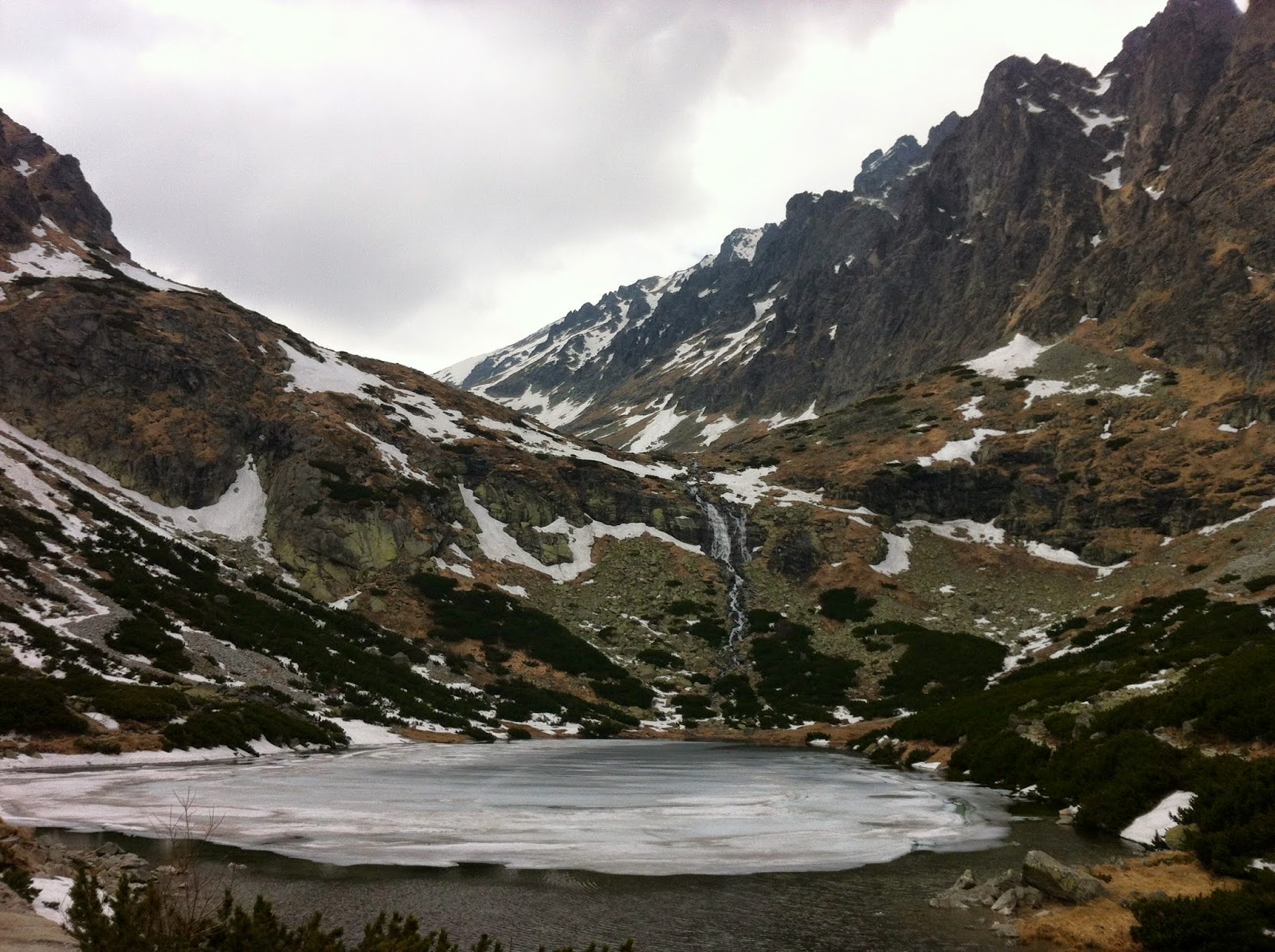 At last we were in view of the frozen lake, which was indeed still frozen. And now snow lay at our feet. A final scramble along a much flatter path - to the evident amusement of other hikers, clad in winter-style gear - led us to it. Finally stopping, it struck me just how cold it had become.

"Shall we save the beers?" Siobhan said.

"Probably not a bad idea, yeah," I said, putting on my jumper.

After all, we had to get all the way back down.

We stayed in: Zdiar, a surprisingly sizeable village in the Belianske Tatry mountains with copious accommodation. Our hostel was the Ginger Monkey.
Posted by Adam Blanden at 06:02