In 2014 the world finally spun off its axis into a suffocating vortex of incomprehension (just like the last half of Interstellar). Yet consolation was always available in the form of culture, which continued despite the progressing apocalypse. The next few posts will include some of this year's cultural consolers and a few of its challengers too - from Chekhov to Aphex Twin, the Oxford historian Selina Todd to the posthumous Vaclav Havel, Gang of Four to Gyorgy Lucacs, Nietzsche to the economist Thomas Piketty and many more. 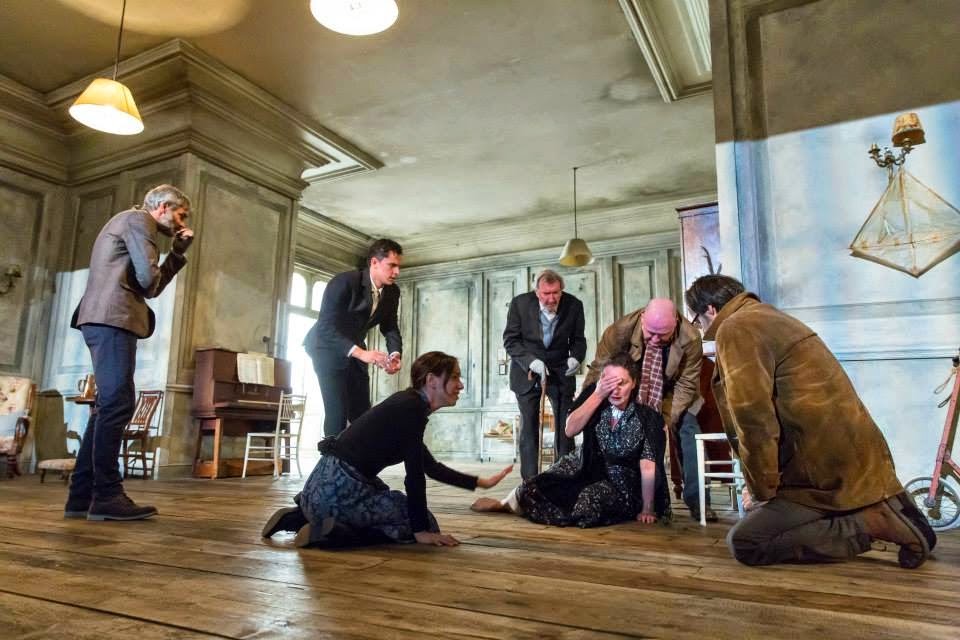 9. The Cherry Orchard by Anton Chekhov directed by Katie Mitchell at the Young Vic

One of Chekhov's most celebrated plays, The Cherry Orchard sees an aristocratic Russian household and its various hangers-on tumble into disaster as their estate is bought up by a rising rural bourgeois and scion of Emancipated serfs. Springing up everywhere in the work of Chekhov are the complex interactions of class in the social imaginary of modernity. This is why Chekhov, the exemplary son of mercantile traders, remains so widely staged (second only to Shakespeare): for anywhere fallen under the spell of market-based modernity, nothing exports so well as the point of contact between age, class and time.

Katie Mitchell's staging at the Young Vic received largely positive write-ups, but it was a mixed review in the Telegraph that was most attentive to it:

... at times you can't see the wood for the trees. What is being said? Why does it matter? Some characters speak with their backs to the audience and mutter too. The naturalism becomes so studied as to risk looking artificial, the lack of ostentation tips into its opposite, something showy. There's a lot of bustle, but little that moves you.

True, the naturalistic staging is itself almost hyper-real. It is at the same time almost a parody of social realism by means of that genre's paraphernalia: the crumbly walls; the unmade bed; the thinning curtains. And sticking out like a sore thumb in this setting are the sudden, off-stage jolts (of a steam-train or a blackout or a chainsaw), which serve not only to remind the audience that this is all a construction but also to menace the characters themselves with their own vulnerability. These elements of the spectacular cut through the traditional naturalism in an effort to create the very peaks of dramatic tension that naturalism itself is supposed to disavow. Thus the pervasive atmosphere of gloom in Mitchell's production of a play which Chekhov himself insisted was a comedy. In this sense the production stays close to the question of form Chekhov himself was asking: how, in a modern context, to shape dramatic effect? Some critics complained that Mitchell's production leaned too heavily on the tragic (Stanislavski did the same); yet the ambiguity - the movement between tragedy and comedy - is structural and integral to the play's probing of the difficulties of staging modern drama.

The name of Nietzsche is raised once (by the drunken Pischin: "My daughter tells me he says it's possible to forge banknotes!"), though only to gently satirize the narrow horizons of the rural landowner for whom the next payment is all. Yet it was Nietzsche who declared that the "rebirth of tragic man" - dead since Socrates and disdained by modern passivity - was possible only through violent sacrifice: "The tragic man affirms even the harshest of suffering." The critic Gyorgy Lucacs displaced Nietzsche's "tragic" problematic onto a class terrain, in which the possibility of tragic drama is limited by its particular, bourgeois setting. In "The Sociology of Modern Drama," Lucacs argued that the intersections between classes had become as important as the confrontation of men of the same class in traditional drama: "Because men collide who come from different situations, value judgements must necessarily function as importantly, at least, as purely individual characteristics." The structure of modern society has created a complex dramatic environment in which different worlds - and the worldviews [Weltanschauungen] that support them - collide. This intensifying complexity of social perspectives means that, rather than individuals locked in conflict with each other, we have sets of social values embodied in particular characters. Because of this complexity, and the structuring presence of the social, it also became possible to question the notion of the "heroic" act, of the self-propelling individual, central to traditional drama. Herein lies the challenge to both the dramatic "hero" and the dramatist: as Lucacs asks, "How can man achieve a tragic action? Is it indeed he who achieves it?"

Chekhov goes further even than Lucacs in suggesting that class perspectives do not simply "collide"; indeed they may even - at the level of the imaginary - cross-pollinate. As so often with Chekhov it is parody that provides the formal grounds for exploring this cross-pollination. Having purchased the estate from the family the rural bourgeois, Lopakhin, shakes his fists at the heavens and invokes the names of his ancestors, once serfs under the Ranevskys. His moment of victory is at the same time the play's tragic dénouement. Lopakhin is an archetypal "practical man", though invested by Chekhov with a keen sense of ancestral pedigree. As Lucacs again puts it: "The world of drama is one where "past" and "future", "no longer" and "not yet", come together in a single moment." At a very fundamental level the impulse of Lopakhin is to vanquish this set of historical encounters as so many demons. "You," he tells Mme. Ranevskaya, who helped raise him, "helped me forget all that history."

Lopakhin is right in a perverse way: Mme. Ranevskaya longs to find a place outside of history - a place, that is, of shelter in memory; in a collective, familial project which opposes the martial imperatives of progress. "Here you are," she says to the cherry orchard in which she played as a child, "again and again and again." The orchard is for the Ranevskys a symbol of childhood and innocence; the realized force of nostalgia which acts as a shelter from history. If the message is that the orchard must go, must be destroyed by the forward march of time, it is not delivered with any zeal. Indeed, it is with deep regret that the Ranevskys leave the stage to the likes of Lopakhin. "You're necessary in a way," the student radical and romantic Trofimov tells Lopakhin. Yet Lopakhin - the practical man of commerce, releasing himself from the bondage of the past by his own ingenuity - mirrors the student radical Trofimov with his belief in progress. "All our philosophical chat has only one purpose... namely to distract," Trofimov says, preferring action to words in an echo of the Marxist dictum: "Until now the philosophers have only interpreted the world... the trick is to change it." Our sympathies, however modern in form, gesture towards the nostalgia of the aristocratic, familial project; towards a constructed inheritance with an emphasis on perpetual youth and innocence, sheltered permanently from history itself. The Ranevskys are the image of a vanquished antiquity, the stain of the past in the present.
Posted by Adam Blanden at 03:08