In 2014 the world finally spun off its axis into a suffocating vortex of incomprehension (just like the last half of Interstellar). Yet consolation was always available in the form of culture, which continued despite the progressing apocalypse. The next few posts will include some of this year's cultural consolers and a few of its challengers too - from Chekhov to Aphex Twin, the Oxford historian Selina Todd to the posthumous Vaclav Havel, Gang of Four to Gyorgy Lucacs, Nietzsche to the economist Thomas Piketty and many more.


4. Capital in the Twenty-First Century by Thomas Piketty 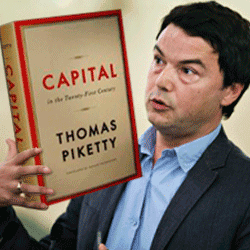 Read the article I wrote for New Left Project on Piketty, Stiglitz and liberal reformism here

Thomas Piketty, a Parisian economist, was plucked from data-churning obscurity last year in the wake of his book Capital in the Twenty-First Century. It is not difficult to see why: here Piketty combined a lifetime's devotion to data analysis with generalising, sweeping insight. There is both elegance and statistical weight to his much-cited formula that, where the average annual rate of return to capital (in the form of profits, dividends, interest, rents, and more) exceeds the level of growth in an economy for a long time, a "force of divergence" will concentrate wealth in fewer hands. Written in the form r>g (where r is the rate of return and g is growth of output), Piketty thus has a formula which demonstrates what is happening to wealth in especially, but not exclusively, the advanced capitalist economies. Piketty explains the divergence as a result of slowing growth, itself caused by dwindling population growth. He explains that, in conditions where returns to capital are high relative to growth rates, the owners of capital "need save only a portion of their income from capital to see that capital grow more quickly than the economy as a whole." (25) Wealth for the very rich will therefore increase very quickly while income to labour will stagnate with growth. Inherited wealth will come to dominate wealth earned "meritocratically" through hard work and achievement.

As I recently explored in an article for New Left Project, this analysis has put fire in the bellies of reforming, though ideologically quite "bourgeois", liberal economists like Paul Krugman and Joseph Stiglitz. Together they are turning their collective ire on inherited as opposed to earned wealth in a perceived showdown between meritocracy and plutocracy. Piketty himself, in his penchant for rationalism and the "cadastral survey", has clear sympathies for the ideals of the bourgeois republic. Good data, he claims, will save us all from the woes of bad distribution.

His fatal flaw, however, is in the failure to deeply contextualise the historical data which he so ably surveys: Where, after all, did the great leaps forward of nineteenth and twentieth century growth rates come from? What happens to the capital that the wealthy do invest - why is it not generating growth? Or why, in the advanced capitalist west of the twentieth-first century, might growth be tailing off? As I suggest - following Wolfgang Streeck in the New Left Review - western capital may be confronting insuperable barriers to its future expansion. Without the high growth rates which funded the distributive losses to capital of the era of democratic suffrage, can capitalism in the west continue to afford democracy? Or, put in Marxist terms, with declining growth rates since the 1960s, and with the developmental fruits of increasingly competitive markets being captured by emerging economies as opposed to the old western industrial juggernauts, capital in the west must find a way of increasing its "rate of exploitation" (s/v, the ratio of surplus value to variable capital) through intensification of labour or it must find newly monopolisable commodities (hence the scramble to commodify, through patents and branding and intellectual property, ideas as opposed to physical goods as such).

Rates of return - including interest, dividends, and other financial wealth indicators - may, as Piketty argues, be stable; but profit rates for US manufacturing firms have experienced no steady increase since the 1960s (with the brief exception of the post-Plaza, post-recessionary Clinton boom in the US). Uneven development of the global economy and competition from rising regions have sapped the life out of the "base" of a growing number of western economies (as argued by Robert Brenner in his book The Economics of Global Turbulence, the data from which I rely on here). Though manufacturing is far from the be-all-and-end-all of economic vitality, advanced western economies - and the US in particular - have been forced to bear the brunt of manufacturing decline. Since the 1970s the US in particular has attempted to secure its hegemony, often by trying to maintain a strong dollar; expand financial dominance; intensify domestic consumption without increasing wages, and ultimately by disastrously committing to the "asset price Keynesianism" that led to the sub-prime mortgage crisis. In the face of the failure of all projects undertaken so far, the advanced western economies must invent yet another new means to assert their global dominance and to coordinate hegemony.

Not, then, a generalised or generic "crisis of capitalism" (one of the great theoretical myths developed from the closed, abstract model of capitalism used by Marx); rather a crisis of western led capitalist development manifesting itself as a breakdown of US hegemony.

The pattern of US manufacturing decline will result in ever deeper financialisation of the "real" economy and the further concentration of wealth in the hands of the few. With western industry fundamentally uncompetitive, yet with torrents of investment still pouring in from exporting countries, the US in particular is forced to develop ever deeper credit markets to fund consumption in the midst of declining overall compensation to labour. "Neoliberalism" remains the catch-all given to precisely the kind of project that seeks to guarantee western power through financial hegemony; the only problem is that - despite the hearts it has won among policy makers and intellectual elites; despite the unprecedented string of victories it has won against organised labour; despite its command over global financial markets - it keeps failing to secure long-term stability in the declining west. By the standards needed to rejuvenate and secure western hegemony against growing international competition, neoliberalism has not been radical enough. The harsh reality is that any rise in the federal funds rate - and a consequent increase in the real rate of interest - will curb domestic consumption. Not only this but such a move will increase US reliance on imports, increase the strength of the dollar in a glut of foreign investment, and ultimately further undermine US industrial competitiveness. Although the US economy grew by five per cent in the last quarter of 2014, even the Economist accepts this is the product largely of a drop in oil prices and "faint" signs of wage increases. A 1.2 per cent growth in median income last year does not bring any relief to families who suffered a loss of income of eight per cent between 2008 and 2011. This is hardly a convincing uptick in overall compensation to labour. No doubt, in such conditions, finance will fill the gaps that wages cannot. The model has not changed, even if the number of jobs is increasing.

The overriding question for western elites is: can the west lead through financial hegemony and low domestic growth alone or can it finally unburden itself of the immense amounts of over capacity in its economies and by what draconian, anti-democratic measures?
Posted by Adam Blanden at 03:18