Progress and its Permutations: Theory and Practice

A version of this essay originally appeared at prague Revue.

What do we mean when we say "progressive"? The UK Liberal Democrats, currently in coalition with history's most successful and adaptable Conservative Party, have unblushingly described themselves as "progressive". Everyone from Paul Krugman to the Pew Research Center is sure that, despite the drone strikes and increasing power of a financial plutocracy, the Obama administration is a "progressive" one. The Economist, meanwhile, insists that Obama take advice from Republicans if he's to be a "true progressive". Reflecting the transatlantic trade in political jargon, the term has loosed itself from geographical and ideological moorings, becoming universally accepted shorthand for dispassionate, even-handed public policy. In ideological practice, what such semiotic flexibility implies is an ever more capacious "centre" and a juxtaposed "radical" fringe (from right-wing nationalists to social-democratic Greens).
In its country of origin, the United States, "progressive" has long been a liberal substitute for what "social-democrat" meant in Europe: thus the adjective (formerly applied in a technical sense to "progressive" income tax regimes, in which those at the top pay proportionately more than those at the bottom) became a proper noun: in hushed tones, "She's a progressive." Closely aligned with Civil Rights struggles throughout the 20th Century (a social coalition whose legislative highpoint came with the 1964 Civil Rights Act), the "progressive" wing of the Democratic Party was a proxy electoral representative of the often disenfranchised black working class. In terms of elections, however, the progressive social power base was overwhelmingly the unionised, industrial working class of the north.

Shifting the Balance of Class Forces
Geographical distribution—of industry and of working classes—has been crucial in determining the fate of American progressives at the ballot box. The main electoral strongholds of the progressives lay in the traditional northern home of urban industry, with its militant, unionized working class. As the Marxist economist Robert Brenner, writing in the New Left Review, has convincingly shown, the long-term breakdown of the social alliance between the Democratic Party and the Civil Rights movements coincided with the first of several grand geographical shifts in the concentration of US capitalist accumulative capacity. In sum, the declining industrial north, with its high-cost unions, was beaten down by a more muscular, low-cost, ideologically anti-union south. The white working class didn't, as is commonly assumed, ditch the Democrats over black civil rights; in fact, the unions remained loyal while capital relocated to the south. There the Republican Party waged a largely successful battle to win over a 'layer' (in Lenin's terms) of southern workers to a new ideology of free markets, thus sustaining low union density and stunting the growth of social movements against the free rein of capital.
Any threat posed by progressives—either those of the Democratic Party or the working class and social movements aligned with them (not only for black civil rights but also, importantly, for women's rights, immigrants' rights and the rights of many other marginalised groups)—to the successful accumulation of capital has long since been neutralised. Indeed, with its domestic defeat at the hands of a globalising capitalist class, the situation was ripe for the globalisation of the term itself. Thus the pyrrhic victory: as the class content of the term "progressive" has been eviscerated, so has its international acceptability increased. In the Britain of today it is far less thorny to describe oneself as a "progressive" than to be saddled with the cumbersome sounding "socialist".
David Miliband, recent loser of a UK Labour Party leadership election and favourite son of the Party's Blairite right, recently toasted Barack Obama's wrestling with the contradictions of progressive rule in straitened times. Although Obama has been forced to make welfare reductions that pain his liberal instincts, Miliband argues, his underlying progressive sensibilities have helped him understand their long-term unavoidability. All principle not aligned with the market is consequently deemed "dogmatism." In ideological terms, progressivism has identified itself with the market as the embodiment of progress. To attempt countervailing action, therefore, is to tempt the condemnation of history. The goals appear to be nothing more than making jobs (however short-term and disposable) and sustaining finance-based growth to the benefit of nobody but the imperious sounding "markets."

Playing Defence: The Obama Presidency
For many, Obama has failed to define the field of play over the course of his presidency. For those sympathetic to him, the reasons for this are simple enough: despite the major legislative achievement (an extension of private healthcare), Obama's has been a largely "defensive" presidency. "Both Bill Clinton and Obama have spent as much time defending progressive advances—from Social Security and Medicare to voting rights and abortion rights—as they have trying to extend them," saidDavid Remnick recently in the New Yorker. Due to an intransigent right, Obama has had to narrow his horizons.
What specific set of achievements is Obama the perceived defender of? Little of the financial-regulatory architecture of the New Deal era remains intact, Glass-Steagall itself having been repealed by, of all people, a Democratic president. The welfare programs of Johnson's Great Society have become subject to a far higher degree of conditionality than its designers anticipated. Repeal of Don't Ask, Don't Tell and quiet support of gay marriage attest less to a clear legislative program than a series of public statements designed to evoke an attitude of pragmatic progressivism. Dodd-Frank, a damp squib of a regulatory effort, did exactly as it was designed to: that is, allow the president to look presidential while further guaranteeing Federal Reserve power over the practicalities of regulatory enforcement. This was "regulatory capture" not as unintended consequence of naive policy but as the guiding light of public ideals. It doesn't take an economist to realize that a central bank composed entirely of pro-market financialists with growing autonomy from any properly public oversight is at risk of making deeply partial choices. 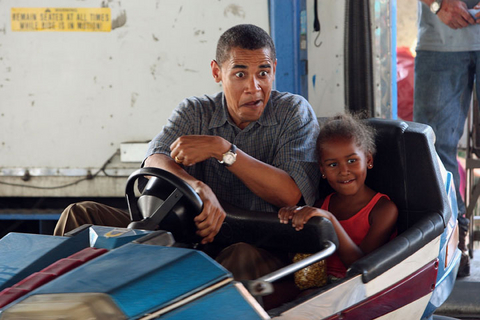 Obama has found the path to progressivism fraught with peril...
Politicians like to talk about "winning coalitions": disparate groups of people rallying together around a hope-inspiring candidate. Viewed at a distance from the sterile politics of lobbyists and opinion polls, election victories look rather different. By Obama's 2008 victory, the organised, militant unionists of the 1960s and 1970s had been replaced with the modern era's lower middle class homeowners. This was, in essence, a 'layer' of the working class which had been initiated into patterns of high consumption and property ownership. The Democratic Party has consistently positioned itself as the champion and protector of these "middle class" interests. Take this as euphemism for a heavily-mortgaged, often debt-burdened lower middle class worried by federal and state-level insolvency and what that might mean for jobs. Thus the Democrats' defensive role looks more natural; its unwillingness (or inability) to expand social programs is a clue to its real interests. Certainly, worried homeowners came flooding back to the Democrats in the wake of the disastrous Bush presidency.
Just as importantly, Obama has also benefited from the overwhelming support of newer immigrant voters, many of whom work in low paying, highly insecure jobs. Though these voters do not, for the moment, carry anything like the collective power of the established lower middle class, their numbers tip the balance of electoral forces in the Democrats' favour. Yet without organisation of poor and immigrant voters—along the lines of classical trade unions or more flexible social movements—Democratic policy will continue to bend itself towards the vulnerable lower middle class.
Much as the earlier geographical relocation of industries and the revolution in technologies—from Detroit and the mid-west to Texas and Silicon Valley—all ultimately served to build a Republican voting bloc, so the recent economic crisis has personified another turning point in class alignments. The decline of domestic American industry through a combination of technological improvement, international competition and off-shoring of plants, has led to a permanent decline in long-term, stable jobs (the kind that historically leant themselves to unionisation). At the same time, a vast service industry has arisen, providing increasingly precarious work to a growing section of the population. Class in America has moved away from the traditional factory workplace, perhaps permanently. Yet the majority of the US population remains concentrated in the cities, the populations of which, though disempowered relative to their mid-century working class equivalents, are very likely to vote Democrat. This does not, however, guarantee progressive legislation. In fact, with the fractured, isolated character of the American working class being what it is, electoral politics is unlikely to properly represent class interests. A long-term stalemate is likely to ensue, with the Democratic Party easily able to get elected but unable to implement redistributive or classically progressive policies (perhaps even incapable of articulating them).

A Legislative Stalemate?
One of the great ironies of demographic changes in the western world—with ageing societies rubbing up against new, resourceful immigrant communities—has been the strange sclerosis of the once-mighty parliamentary and legislative systems that underwrote western democracy. As societies themselves have become more fluid and more contradictory, politics has become simultaneously more inflexible and more myopically fixated on outdated electoral maths and the management of the jobs market. As has been widely noted, this sclerosis of the centre has allowed extremism to flourish on the margins.
Increasingly alienated, unrepresented voters are turning away from the staid, technocratic language of mainstream politics, with its utter dread of "populism" and all energy not easily contained by central policy-makers, yet those voters find few institutions ready to bear their anxieties. The answer usually proffered by the social democratic or progressive mainstream is a reincorporation of former voters by an appeal to their "extreme" instincts.
The real answer is rather to move away from parliamentary and congressional centralism with its outdated obsession with the workplace and management of the jobs market. In fact, given the decline of the portion of the American workforce in stable jobs, perhaps the answer lies in developing novel, informal associations and political organisations not dependent on the old trade union and party systems. A reorientation of progressive politics away from the traditional prioritisation of the jobs market—to focus on, say, the provision of decommodified public goods (healthcare, social housing, utilities); the democratisation of finance; the development of civil society institutions and community initiatives independent of the discredited parties—might serve to reintroduce some energy and interest into the old ways of doing progressive politics. Otherwise, progressivism will continue to narrowly locate its voters' interests in cheap consumerism, the jobs market, homeownership, and credit expansion to support it all. Framed in those bleak terms, what conservative wouldn't want to see a little more progress, after all?
Image via wikimedia