Corbyn's Critics on the Left 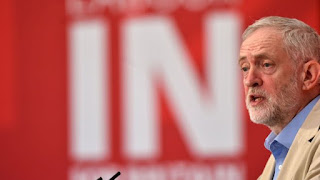 The argument from Corbyn's soft supporters/soft critics about his frustrating poor performance in the media over the last nine months is an interesting one.

There are examples of Corbyn screwing up - like not going for the Tories over IDS' resignation. I'd add some sloppy tv appearances and, more importantly, his failure to rein in the right or minimise the attacks from the right.

Many of the complaints from people like Owen Jones have been nebulous, with few specifics and no concrete suggestions about how anyone could have done differently.

I wouldn't put Corbyn's limitation down to inexperience/personality but rather to style. He is clearly uncomfortable criticising individuals or channelling popular aggression. He is a conciliatory type who stresses unity and working together and though his criticisms are stinging they are often targeted at an anonymous system or at most a loose collective - "a powerful few" "the elites". He doesn't do combative. This sits badly in the Westminster "bear pit."

Something that's has been missing is mass mobilisations - but he's been treading a careful line not trying to piss off the PLP till now.

I also don't think he's a "master strategist" in the way everyone used to call Osborne (in the end it turned out Osborne's string-pulling was farcical and the harsh economic reality of his own failures caught up with him). Corbyn is good at attacking the government, probing its weaknesses and imposing defeats on it. He's not apparently always best at spinning those victories into a media narrative.

But all of these criticisms are speculation since we simply can't see what's really going on behind the scenes: if there's frustration with him we have to remember his every act is mediatized and fed to us via the press. Do we simply project frustration with the media onto Corbyn, expecting or demanding truly superhuman feats?

On the one hand, Owen Jones wants Corbyn to lead a principled left-wing opposition doggedly attacking the Tories. On the other hand, he wants a media spectacle designed to win over the soft left and hearten the PLP. I'm not saying these two are fundamentally irreconcilable, only that - in the present circumstances - there is simply too much to be done for any leadership team to manage.

How can you work with a group like Momentum, attend protests and strikes, fight to democratise the party and simultaneously present a friendly media face that can keep the Guardian (which has always hated him) and the Mirror on side? How can you do any of this and not alienate the PLP, thus exposing Labour's internal chaos to the public and having a negative effect on the polls?

For the moment, there's so much to do all at once and the left is so historically weak that it's impossible to expect success from Corbyn's team on all fronts at once. And the constant demand that he "do better" - as opposed to serious ideas about how to improve the operation - just plays in to the hands of his enemies on all sides.