The Left Should Celebrate Its Marxist Heritage 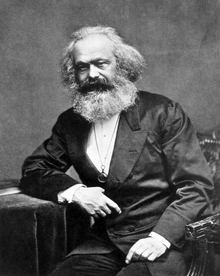 People on the left need to stop insisting there is a large gulf between their “common sense” policies and some radical spectre called Marxism.

This sort of thing reached a nadir a year or so ago when John McDonnell couldn’t get on TV without being asked if he was a Marxist. To be fair to the Shadow Chancellor, he didn’t exactly deny Marx’s influence on his thinking, but listed a range of socialist and non-socialist economists on the left who are part of his outlook. The real problem was when parts of left Twitter responded by @ing Andrew Marr with Tweets claiming the question was analogous to asking David Cameron is he was a Nazi. This is a bad take on many, hopefully obvious levels.

Recently it has cropped up again in response to increasingly unhinged allegations by a visibly ruffled right wing press that the nation’s youth has fallen to communism. You don’t have to be a Marxist to raise corporation tax to 25%, but being a Marxist certainly helps. This is because contemporary Marxist economics is full of interesting, heterodox analysis about how modern economies work and it’s increasingly easy to take that theory and build policy out of it.

Publicly disavowing Marxism’s influence on the contemporary left might seem expedient in the short term. But it won’t stop accusations of communism. And if anything we should respond by saying yes, indeed, most Marxists would agree that we need to raise corporation tax. But they’d also go further and say we need de-commodified public goods and public spaces, and the right to democratic control over economic life. We should be insisting that Marxism shares a lot with popular common sense.

This is not to say that most Labour members or even Momentum members have any interest in the finer aspects of dialectical materialist philosophy. But some of the basic presuppositions of Marxism - that we live in a class society, that there are values which exist outside of market commodification, that the image of homo-economicus does not come close to explaining human nature - are a part of the texture of progressive politics around the world. And today, Marx is being reimagined for the modern world.

This hasn’t always been true: for a time after the fall of the Soviet Union, there didn’t seem to be much life in the vast body of Marxist political and economic theory. History’s most powerful and influential anti-capitalist theory had somewhat fallen by the wayside. But no more. Take the SOAS economist Costas Lapavitsas, for example. Lapavitsas is as influenced by Rudolph Hilferding’s Marxist work on financialisation as he is by the infamous German philosopher himself. A basis in Marxist value theory and, in particular, Marx’s theory of money has spawned one of the most innovative and comprehensive analyses of the contemporary conjuncture. Lapavitsas, in collaboration with the Keynesian Heiner Flassbeck, is also a trenchant critic of the monetary arrangements of the Eurozone.

Or take the range of conceptual innovations of David Harvey, who has recast Marxian theory as a critique of geographically- fixed processes of accumulation. Or even Lapavtisas’ fellow Greek economist Yanis Varoufakis, whose work is eclectic but nevertheless underpinned by a specifically Marxist conception of value formation under capitalism. Both Harvey and Varoufakis contrast exchange value (or the value of marketised goods) and use value (or the real human needs and desire that exist regardless of the market). Out of this they have produced compelling and exciting theories about how our contemporary world works. There is nothing as thrilling or true to be found in orthodox economics as Harvey’s notion of “accumulation by dispossession.” This is Harvey’s way of talking about the continual recourse to violent expropriation which underpins the ‘norms’ of market processes. Anyone confronted with the darker underside of the bright and gleaming capitalist market - a netherworld of lawless super-exploitation - will recognise Harvey’s description. The dismantling of social protections and the continual destruction of people’s mode of existence is here explained as a prerequisite for capitalist exchange value creation.

Marxist political economy is both more accessible than orthodox economics and truer to the world in which we actually live. Fundamentally Marxism sees society as divided into classes and these classes must struggle for control over socially produced goods. Wealth is primarily social wealth and is only individualised by relations of production, the institutions of the state, legal forms, and ideology. Of course, it paints a simple picture of a complex reality - just like any theory. But its basic components - of groups defined by their relation to the means of production, wealth, and the state - allows even in its simplest form for a far richer picture of the world than orthodox economics. For most orthodox economists we have only individuals with their utility maximising self-interest, firms with their innovative drive for profit, and governments with their bias for public choice. This is a world without passion or conviction or many of the things that make us complex - it is a world without politics.

There are limits and shortcomings to Marxism. The less said of its so called orthodox variant - endorsed by the Comintern during the Cold War era - the better. And it is true that the left must always be aware of the intellectually moribund and outright dangerous, anti-democratic strains of Marxism which led to Stalinism. Just as extreme nationalism, colonialist imperialism, and environmentally destructive consumerism developed in part out of the classical liberal worldview, Marxism can become dangerous if it is not rooted in the daily lives and democratic movements of the broad mass of people.

Moreover, some more heterodox Marxism can still be at least potentially theoretically reductive. Even the work of great political Marxists like Ellen Meiksins Wood can sometimes appear to reduce ‘non-economic’ forms of exploitation such as misogyny to hangovers from past modes of production (however useful they may be to capital). Rather than seeing misogyny and other forms of oppression as vital components of the contemporary capitalist system, Marxism can sometimes depict them as secondary to the ‘foundational’ forms of class exploitation which are inscribed in the capitalist mode of production itself. Of course, the simplified Marxist model of a capitalist mode of production cannot be mapped onto really existing societies without taking account of all their complexities.

It would also be wrong to argue that the left should be exclusively Marxist to the neglect of other traditions of critique of capitalist society - from anarchism to the more critical end of post-Keynesianism. Just as in real life, theory should constantly cross-pollinate in order to remain vital.

The left risks internalising the anti-intellectualism of the British right, which has always argued that theory is “irrelevant to the real needs.” We should not be doctrinaire in our thinking, but nor should we allow self-styled ‘moderates’ to get away with the claim that they are merely practical solution-seekers. It is the old right which clings desperately to an outdated ideology, while the left is - finally - moving with the times.

The right wants to turn Marxist into a pejorative. It wants to foreclose fundamental arguments about the nature of the societies in which we live and to make its own worldview appear as a reflection of the natural order of things. Most of all, it wants to neutralise the threat of a newly-powerful left which is finally - hesitantly - finding its voice. The left should not only embrace its Marxist heritage, but celebrate its radicalism.
Posted by Adam Blanden at 05:41 No comments: