A History of the Greek Crisis in 15 Points 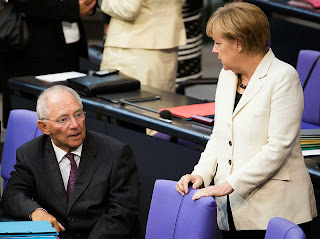 If the apparently never ending story of the Greek crisis demonstrates anything, it is that repeated attempts to implement austerity in a crisis stricken, depressed country simply cannot work. The argument for voting Yes in today's referendum is staked on the belief that lying down and accepting more of the same will yield different results. As these fifteen points show, Greece has already said Yes repeatedly and it has got the country nowhere. These fifteen points explain the mood of defiance and the possibility of rupture in Greece today.

1. In 2007-09 the heavily financialised and over leveraged European banking sector is mired in the fallout from the subprime mortgage crisis in the US. Credit and debt have become an integral part of funding consumption in modern economies. Financial speculation is an integral part of the daily operations of banks.
2. The European Central Bank primes terrified financial institutions with liquidity (which they promptly use for deleveraging not investment) and low interest rates (to encourage lending).
3. With banks newly risk averse and states experiencing growing public debt as a result of bank bailouts and the recession, gaps start to open between sovereign bond yields within the European Monetary Union (meaning the debt of, say, Germany remained cheap while that of Italy and Greece shot up).
4. Greece's budget deficit (eventually revealed to have reached 15.4% in 2009) and public debt of over €300 billion is increasingly felt to be unsustainable.
5. It is revealed in 2009 that Greece has, with the help of Goldman Sachs, "cooked the books", concealing deficits much higher than European Growth and Stability Pact allows.
6. Speculative attacks by a renascent and unapologetic financial sector on Greek sovereign debt sharpen.
7. The ECB stands back and allows speculation to take off . It is not permitted to buy the bonds of member states, instead preferring policies that continue to supply banks with liquidity.
8. In 2010 Greece formally requests a bailout from the European Union, the ECB and the International Monetary Fund, and implements successive austerity packages which will supposedly help pay the debt and encourage a dynamic private sector to fill the gap vacated by the state.
9. German export competitiveness and wage repression prevents any deflationary gains by Greece and other "uncompetitive" economies; euro membership, meanwhile, prevents a sharp devaluation which might spur exports. The political economy of the eurozone, in short, creates a surplus rich core and a crisis-prone, uncompetitive, import-dependent and debt-saddled periphery. Little to no mention is made of the moral responsibility of banks in fuelling peripheral states' consumption via easy credit.
10. Private investors receive a "haircut" on Greek debt of 50% in 2011, so debt becomes official and harder to default on. The few losses for private investors tend to be imposed on Greek pension funds; banks are once again protected.
11. The Greek state spends more than 90% of all bailout funds paying back banks, which then hoard the cash (preferring liquidity to growth-inducing investment). A lack of public and private sector new investment further depresses the Greek economy. Northern Europeans taxpayers are forced to publicly finance a black hole of debt which pays off banks and spawns no new investment.
12. By 2015 Greece has shed a quarter of its economic output, has over 25% unemployment and 60% youth unemployment. Despite the debt burden, the total collapse of imports registers as a current account surplus for the first time since 1948. This is celebrated as a perverse kind of achievement. Huge interest repayments are made. Homelessness, poverty, suicide, all continue to rise.
13. After half a decade of often violent social opposition in Greece the radical left party Syriza is elected on a promise to end austerity. Almost immediately the ECB cuts funding to the Greek banking sector. After months of uneven negotiations with the radical left government, the troika of lenders (the ECB, European Commission and the IMF) force the imposition of capital controls.
14. Despite untold human misery and the failure to produce either growth or a reduction in Greek debt, European leaders queue up to demand further austerity. Greece experiences shortages of basic food and medicine.
15. Throughout all this Greece's public debt has risen in absolute terms from 300 billion to 323 billion euros. The alternative to austerity remains anathema to the entirety of European officialdom.
Posted by Adam Blanden at 07:27