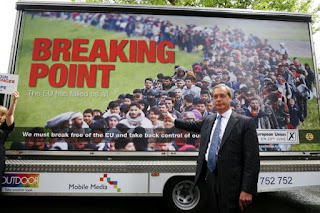 Free movement of people is a right we should fight for. Migration is undertaken by millions around the world because it is the only way to avoid loss of livelihood through economic disaster or decline, not to mention those fleeing climate disaster, persecution or war. There is a clear reason to support free movement of people: in a situation where capital is free to move, people must be free to do the same.

But what about the countries immigrants go to? Much of the Leave campaign's argument in the EU referendum rests on the supposed threat to Britain of "uncontrolled immigration." But a recent report which analysed the effects of European Union migration by the London School of Economics - far from a left-wing propaganda base - made clear not only migration's benefits for the country as a whole, but also the lack of almost any local drawbacks. Drawing on data from a range of sources, notably the Labour Force Survey, the report concluded that even though the EU migrant population trebled between 1995 and 2015, almost no perceivable downsides emerged. In terms of raw economics, they found migrants made an obvious contribution to GDP: 78.2% of the UK's EU migrant population are in work (above the UK average). Moreover, because they are on average better educated than UK born workers and have the potential to earn more, they add to demand in the economy, spurring economic growth and creating more jobs than they take.

Immigrants from the EU are not on the whole taking jobs but making them. "Alongside increased demand that a rising population brings, greater movement of labour allows countries to specialize in what they are best at," they conclude. Half of all net migration to the UK comes from the EU and the people coming here are not taking jobs from the poorest. Nor are they placing undue pressure on services or placing any notable downward pressure on wages. Indeed highly-skilled migrants may contribute to productivity growth and drive up wages across the economy. The Migration Observatory does, however, argue that low-skilled workers in certain sectors do stand to lose. But this short-term loss can be offset by rising wages and rising employment in the long-run, both things that can be achieved through investment, an interventionist economic policy and a restored role for trade unions.
Britain has seen a 10% drop in median income since 2008. And the LSE report is equally clear as to where the blame for this should be placed: "The cause of the fall of wages is the impact of the Great Recession - not immigration." And as if that wasn't clear enough, when it comes to unemployment, the authors state: "There is absolutely no statistically significant relationship (positive or negative) of EU immigration on unemployment rates of those born in the UK." Again with the provision of public services, they note no increase in hospital waiting times other than those related to the government's squeeze on NHS funding. And finally housing: "Lack of access to housing has more to do with the falling supply of social housing." As the government plans yet another council house sell-off, it has spectacularly failed to meet rising needs. The root cause of all this is a government hell-bent on making the less well-off pay for a crisis caused by global finance and the collapse of the banking system.

Support for the free movement of people doesn't have to be a zero-sum trade off in which either foreign-born or UK-born residents get ahead at the expense of the other. It doesn't have to be seen that way because indeed it doesn't really work that way. The enduring tension between the nation-state, so necessary for supporting and subsidizing the inefficient capitalist system, and the global market, into which capital self-destructively over-extends itself, is not the fault of labour. The contradiction belongs in the final instance to the capitalist class and the system of gross inequality it creates. Global labour movements are not the cause of capitalist crises, but one of its few correctives.

Still, it will do no good to get starry-eyed about the European Union's labour movement policies. The EU is not really a free movement option: for years mainstream European politicians of both right and left have been lambasting the "failure of multiculturalism" (Angela Merkel) and the rise of "benefit tourism" (David Cameron) while calling for "a clampdown on illegal immigrants" (Nicholas Sarkozy) and "strict migration rules"(Tony Blair). Politicians of both the centre-left and centre-right have felt no compunction about blaming the poorest ethnic communities in their countries for social ills caused by their own regressive policies. Recently fences have gone up between central and southeastern Europe to prevent free movement; the ideals of the EU itself are violated by the agreement to deport non-EU migrants and refugees to Turkey; and most recently looming deals with criminal states like Eritrea and Sudan will put lives in extreme danger. For those outside the EU and increasingly for many within, the EU is an impregnable fortress, content to let people die on its borders and suffer destitution and inhumanity within. Within the EU's migration system - if the chaos, suffering and death that goes on across Europe can be called a system at all - the actual dangers are clear. Yet they are not in anyway dangers for "native" populations, but indeed for migrants and refugees themselves.

The costs of migration are almost always negligible while the gains are significant. However, the threat to migrants' lives from unsafe migration are clear. Punitive, negligent or even deliberately life-threatening migration policies solve nothing. Over three thousand migrants and refugees have drowned in the seas around Europe in the last year - yet people continue to come. Thousands more languish in pointless destitution in camps and on borders. But the retort goes that surely not everybody can move? Surely, by accepting those in camps, we are sending the wrong signal abroad? It is obviously true that not everybody can live in Northern Europe. But the answer to this is equally obvious: of course, free movement is only a good insofar as the choice to migrate is taken "freely." I use this word fully aware of its complexity, especially in choices like migration, which involve abandoning everyone you know and love and moving thousands of miles away from home. But we will only have conditions in which free choices can reasonably be made when there are no western-backed or western-imposed wars or murderous regimes; no globalised neoliberal state corruption in the world's poorest states, financial expropriation or resource extraction; no sucking of the economic life out of poorer states and into western-controlled tax havens. If you want to curb global population movements and all the destructive waste of human life that they presently entail, then campaign to end western wars, economic exploitation of under-developed countries and against climate change. Those who do not wish to talk about global war, capitalist economic exploitation and climate change, should remain silent about immigration.

It may simply be the case that some British people will never accept high levels of immigration and that they are irrepressibly against it. But throughout the history of postwar immigration there has been a political discourse attacking it. Neither Labour nor the Tories are guilt-free in this. Even as inward net migration has increased, mainstream politicians of all parties have pledged to reduce it and repeatedly betrayed their promises. This is one reason trust in politicians is so low and why that loss of trust is channelled through immigration. No party leader has ever attempted to deal with anti-immigrant sentiment or to sell free movement on its own merits because the only consistent way to do so is to simultaneously oppose the ravages of global capitalism itself. We must change that situation fast - or face the continuing rise of the racist and violent far-right.