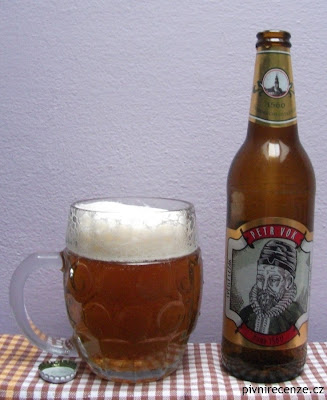 My current favourite Czech beer is called Petr Vok. It comes in a brown bottle, costs 8kc (about 30p) from the supermarket, and is adorned with a charming cartoony rendition of some duke or other from the 17th century (presumably the eponymous Vok). It tastes, as Siobhan pointed out, pretty normal, until it hits the back of your mouth, when it takes on the consistency and flavour of liquified bread. Hearty stuff then. Adjectives like "earthy" and "peaty" spring to mind; all those tough associations between land, drudgery and thirst. Never mind the fact that anyone who's actually worked up a thirst wouldn't want to touch the stuff. After all, who fancies a loaf of bread after a workout? This is why beer was historically the preserve of monks and, well, alcoholics - the line between the devout and the debauched being easily crossed.

Petr Vok, this most Czech of beers, is brewed by the Eggenburg brewery in Cesky Krumlov, a town so Czech that it boasts its home country in its own name. This is the equivalent of calling Liverpool English Liverpool, or rather North western Liverpool. Or calling Los Angeles Californian Los Angeles to differentiate it from all the other Los Angeleses. I like to think Cesky Krumlov is called Cesky Krumlov just because of its impressive Czechness. It's like Prague if it had been boiled down to a hard, compact core of its most Czech features: a hill-perched stately home that everyone insists on calling a castle; a luscious bridge as the town's focal point; a glamorous town square; and lots of pubs. This latter is essential. I've written before about how little Czech pubs vary, but the point deserves reiterating. A Czech pub is like unreconstructed masculinity: the same wherever you find it. Generally it will smell of smoke and body odour, look somewhat threatening, and hold dubious attitudes towards foreigners. It will sell heavy food, heavy beer and hard liqueur to wash it down with. Like so many things in the Czech Republic, Czech consumerism is based largely on repetition without difference (to paraphrase the letter if not the spirit of Gilles Deleuze). They get that people want to consume a lot, but not really that variety can sneak into that desire. Far be it from me to bemoan unsophisticated consumerism. It probably has its environmental benefits. On the one hand, it means most things are made locally. But really, who needs seven varieties of shit Edam cheese?

Anyway, back to Krumlov - my microcosm of Czechness - where identical pubs vie rudely for the custom of tourists they all vaguely dislike. This reminds me of a review I once read of an expensive restaurant in London which specialized in bad service. The restaurant was doing rather well, presumably because there are far more masochist diners out there than anyone anticipated. The situation throughout the Czech Republic is similar, except in one regard: this London restaurant specialized in extravagantly bad service. In "the Czech" service is all about the dispassionate; the cold, disinterested, dead-eyed stare that slices straight through you; the shrug that meets your nervously voiced order; the vague amusement at your inadequate Czech (if, like me, you're a foreigner). This might be because the service sector - especially the pub sector, which is massive - is largely staffed by unreconstructed, uber-masculine middle-aged men who have worked in the same pub their whole adult lives. They prowl angrily around on sticky floors in their sandals and aprons, the model of barely contained resentment. In theory I sympathise: I wouldn't enjoy doing what they're doing either. It's just that, simply to get through the day, we Brits smile through the misery. There's nothing jolly in the British service sector smile, it's just an acknowledgement of mutual humanity and, by extension, a mutual ability to suffer. A recognition (to copy the letter if not the spirit of George Osborne) that we're all in this together - that the roles of the exchange could easily be reversed.

In Krumlov every available flat surface is cluttered with beer benches and beer umbrellas, yet strolling around you discover an odd sameness. The town's homebrew - the stuff by Eggenburg - is actually less widely available than Budweiser (the Czech Budweiser, not the American one, which, while better than its American namesake, is still a top candidate for "Worst Czech Beer"). The same is true of Prague. Pilsner - its base nearby in Plzen - dominates most street views. With the pre-eminence of the Czech pub has come the complete advertising dominance of a few Czech beers. The properly interesting beers and brewers - like Cerna Hora, Lobkowicz, Primator - are shoved to the suburban sidelines. In vaguely posh Vinohrady (squint your eyes and it could be Prenzlauer Berg in Berlin) a few small, slightly off kilter independent pubs sell a decent range of beers. I've just moved to Vinohrady and am still boyishly excited at the prospect of living within walking distance of a pub that sells something other than Staropramen or Pilsner. I can go for a walk and buy a pint of blueberry beer.

In Britain, of course, Staropramen is the odd, continental choice that most neighbourhood pubs stock. They probably sell it for £3.60 (here it's often under a pound) in what looks like a bulbous, elongated test tube. But that's not the point. Staropramen is a pretty dull beer. And nothing makes a dull thing duller than constant exposure to it. The real killer comes, however, with the realization that even my prized localish, craftish beers are in fact brewed and bottled by a mega-global-multi-national-hyper-global-corporation called "InBev". The people behind this ominously bland moniker apparently make everything from Bavarian Weiss Bier to Coke Zero. They probably run a sideline in cheese, producing the molten plastic later to become Cheese Strings in the same factory as vintage Camembert, from the same bullied cows, all using the labour of 12 year olds who are watched over at gunpoint. As we all know, there's no such thing as an ethically pure product in a world where everything is awkwardly interconnected - as the Archbishop of Canterbury will tell you. It's difficult not to buy something of iffy origins - the line between the devout and the debauched still, even today, being often crossed.
Posted by Adam Blanden at 12:26