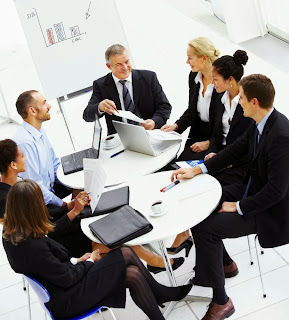 "Business English" is a grizzly little epithet. It suggests something too much at ease in conference centres and on team-building excursions. What business English teaching attempts is a tidy reduction of the language to  battle-ready nuggets of usefulness: thus such aggressively targeted niches of study as "language for describing key players in e-commerce." In theory I've nothing against this. Who wants to study the future perfect continuous when you only really want to be able to go on holiday and, in the words of one student, "not look stupid"? So, of course, teach students what they need.

The problem comes when things get too obscure. When the basic value of learning English for most people is that it's a holiday necessity (like beachwear or sun-tan lotion), it's probably best not to push things too far.  I've never met anyone who really cared about learning the precise etiquette of email writing in English because, unless you're a sociopath, you'll generally intuit it. The same thing goes for "lexis relating to conference calls" or "chatting at the water-cooler".

Like everything else that happens there, people who study English at work are utterly alienated from it. That pretty much rules out homework. Or often attendance. The lessons are a routine only slightly more preoccupying than ordering something from a vending machine or going to make coffee. Indeed, in such conditions, my function is not wholly dissimilar to that of a vending machine: they make a selection, I spit out the right thing. This is consumed with the force at least of habit, though not with any noticeable satisfaction. Its memory is discarded moments later.

Providing such services can be oddly degrading. At least when I'm teaching seven year-olds can and can't there's actual learning going on. I arrive at companies feeling like a cheap door to door salesman, or worse, some kind of motivational speaker. 'Let's all get up and stand in a circle,' I've been known to say. Understandable, then, that the only response is a heavy sinking feeling. The distant whirr of photocopiers grows louder in the conference room quiet. Post-lunch jaws slacken around me. Ties are loosened. Chairs creak under the weight of impatient bottoms.

This quiet weight of expectation is hard to shoulder. I feel, in psychoanalytic terms,like  the classic hysteric: frantically trying to impress some inscrutable master. 'How about this one on over-fishing in the Indian Ocean?' Someone picks at a finger-nail. 'How about this one on the Notting Hill carnival?' A muted sigh. A cleared throat. My most frequently asked question of myself while I'm teaching is: How much of a dick am I being? Not what are they learning? But how annoying am I? This is, I suppose, as it should be, when you're asking for the attention of lots of people who are much older and more experienced than you are. In a business English class, however, the answer is necessarily: Quite a lot of a dick. That's because most people, when they're at work, just want to work. Or not work and talk about what they want. Or better, not work and not talk and stare out the window or do crosswords.

The most terrifying thing about business English and its invasion of the workplace is this: it participates in that postmodern managerial desire to make all time simultaneously recreational and productive. It's not so much a desire to eliminate relaxation, more that those in charge hanker for a world where the division between work and leisure no longer exists: massages and clay pigeon shooting and walking holidays and studying in your spare time and even staring out the window all become legitimate parts of the working day. It's with horror that I imagine myself a part of that.

There is the occasional, heart warming exception. Take Jirka and David. Two computer programmers who work for the incessantly modern Avast (rumoured to have "barefoot" days at the office), they are typically awkward IT types. Neither do any homework, of course. But that's fine: Jirka has a two year-old daughter. David, I think, just comes along for the company. While Jirka is a sort of quiet stoner who enjoys listening to Pink Floyd, David is a short, bald, very shy man in his thirties. Both come along for an hour and a half, and together we do very little. They talk about software, how rubbish they both think Apple is, their families, and what good beers I should try. Then they leave. Their only motivation in coming is, I think, to escape the office for a bit. It's a relief I'm more than happy to provide.
Posted by Adam Blanden at 03:09